DynaVap 10% off with DYNA10% at checkout! Plus E-Rig Special!

This American made desktop definitely belongs in the heavy hitter club.

This is the 6th version of the Supreme, each one improving on the predecessor.  This version is digitally controlled.  It requires a flat coil and enail controller to operate.  Each are sold separately, you are receiving the heating element and accessories only.

The Supreme is capable of tasty full bodied low temp vapor as well as thick plooms as good as anything out there.

*Base Enail by Disorderly Conduction

I did a lot of research for every single one of my vape purchases with the exception of my Pax 2 once I decided to try to switch to vaping. I had previously bought an original Volcano years before any of these purchases (it went to an ex gf), it was nice but was never really impressed with the effects I got from it. Since it was the top of the line vape at the time it kind of put me off vaping for years. After the Pax I wanted something that would hit heavy enough to replace my bong hits at home. During this search I saw mention of the mythical "Supreme Vape" but only the earlier torch versions were available and I was still new to the vape scene. Tons of posts and reviews had me settle on the Plenty, which for a while was very effective but took a while to get me there, this led to me going back to bong hits whenever I had any kind of time constraints. Did some research on why this was and found out it's got a lot to do with the oxygen/vapor ratio (similar issue with the Volcano) meaning you are inhaling as much oxygen as you are vapor. This led me to a VapCap and a Splinter/Splinter Z (the Z is still my go to portable vape and for a while replaced the everything with homemade water adapters). Finally my VAS led me to the land of the "heavy-hitters" forums. I spent months hovering around the new vape webpage looking at the FP and nearly pulled the trigger on it several times, I am glad I didn't. I can't possibly imagine a more efficient, heavier hitting device in existence for dry herb than the SV6. Any bowl type I use, no matter how much I put in I manage to get full extraction in one massive hit (even a sprinkle will give you a giant cloud). The 2 bowl types provided are great and very different: the standard bowl is a tube you can fill with chunks of bud: heaviest hitter, one good hit and you are gone; and the Lotus WPA: most efficient/versatile/easiest to use combos I have ever used. You use grinded buds with this but anything from one tiny sprinkle/scoop to entirely filling the bowl can be cleared in a single hit with a good water piece. I also put together a glass bowl variation using one of the standard Splinter bowls (see pics), a cut screen stuffed down it and a rubber washer around it to make a good connection with an 18mm water piece. Just fit the tubing from the supreme over the glass and take your hit, it works great but I still find myself going to the Lotus WPA the most for it's ease of use and the standard bowl when I really want to be put on my ass. It's also way safer than I expected, especially if you get the handle and the bundle which includes the metal stand. I also received a VGoodiez Moodmat which I put under the stand that gives a bit more protection. In 4 days with it I haven't come close to burning myself or worried about it at all, the SV6 is definitely worth it for anyone who truly wants to experience what each strain has to offer, it is more effective than smoking IMO. VGoodiez shipping was really quick and free! Scott's customer service is top notch as well, I will definitely come to you for any future vape purchases (even though the SV6 cures my VAS for the foreseeable future). This was the only site with all of my top choices in one place and the only place I could find the once mythical (but now mine) SV6, very happy I found this site. 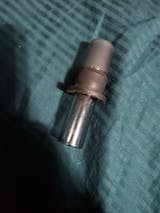 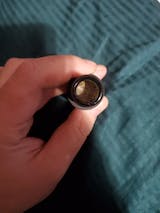 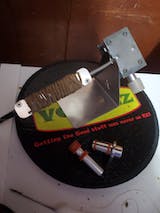 Volcano Hybrid from Storz and Bickel
No reviews
Regular price $698.99